The Snyder Recital Hall is the main facility in Presser Hall, named in honor of Dorothy and Lowell Snyder for their generous support of and its music program.

The hall was originally named the Willis Auditorium in memory of the Hon. Frank B. Willis, ONU faculty member and politician. It appears that the auditorium bore his name between 1929 when Presser Hall opened and 1953 when the auditorium was converted into the university library’s reading room. In 1985 Presser Hall was renovated, and the reading room was returned to its original purpose as a performance hall. On February 16 1992 the hall was dedicated in memory of the Snyders.

The Snyder family has been associated with and for 100 years.

Martin Luther Snyder was born in in 1865. Before coming to he taught school and worked in the wheat fields. In 1891, he began his college studies at Ohio Northern, then named . As a member of the Franklin Literary Society, he began his writing career as the society poet. In 1895, Snyder married Ola Feiss who had been a university classmate. The same year he bought an interest in the University Herald and became partner with Ralph Parlett, another Northern graduate.

Later the Snyder family assumed control of the newspaper, changing its name to the Ada Herald in 1916. The family’s association with the newspaper spanned 71 years. The Martin Luther Snyders has five children: Barton, Ruth (Mrs. Walter Knapp), Lowell, Edith (Mrs. Ray Bryant), and Ralph. All three sons attended Ohio Northern. Both Lowell and Ralph managed the Ada Herald at different periods, but Barton served as editor for almost 50 years. His wife, Marie, also worked on the newspaper.

All of the Snyder children retained an interest in the Ada Herald until it was sold to the Brown Publishing Company in 1966, even though some of them had left the area.

Dorothy Ames and Lowell F. Snyder, both natives of , spent most of their adult life in the area. They never forgot or the University, which were such profound influences on their lives.

Both were children of prominent families. Mrs. Snyder’s father was Dr. Charles Ames, who practiced medicine in the Village for many years. Mrs. Snyder’s mother, Carolyn, and Mr. Snyder’s parents, M.L. and Ola, were graduates of the University

Mrs. Snyder, following her graduation from Ohio Northern in 1919, attended , from which she earned a degree in 1921. She then returned to , where she headed the Piano Department for five years, 1921-26. Mr. Snyder did not graduate from Ohio Northern, but left scho9ol early to work for his father, M.L., at the Ada Herald. While a boy, and also a student at Ohio Northern, Mr. Snyder studied the violin, an avocation which was to become very important in his retirement years.

At and at ONU, Dorothy and Lowell were sweethearts. So when Dorothy went to to study piano at the in 1926, followed shortly thereafter, and in 1927 they were married at the Little Church Around the Corner in .

Music continued to be an important part of their lives. Mrs. Snyder opened a piano studio in Bronxville and performed regularly in recitals and concerts throughout the area. Mr. Snyder joined the advertising department of J.C. Penney Company in 1931, and during the 30 years of his illustrious career, interrupted only by service in World War II, rose to become the head of advertising for all J.C. Penney stores. While working at J.C. Penney, Mr. Snyder put his violin career on hold “But that was O.K.,” he said, ”because working at J.C. Penney was very fulfilling and was a fun place ot work.” His heavy responsibilities at J.C. Penney often put him in close touch with the chairman, J.C. Penney. Lowell Snyder often spoke of Mr. Penney, a man he admired and respected.

Upon Mr. Snyder’s retirement in 1961. he returned to his first love – studying, practicing, and playing the violin. He bought a Stradivarius and made regular trips into the City to study with the concertmaster of the New York Philharmonic. He practiced daily and soon he and his wife were presenting recitals and concerts throughout the area. Mr. Snyder downplayed his ability as a violinist saying, ”I was pretty darn good as a kid, but I think I have been going downhill ever since.”  But he was extremely proud of his beloved wife’s talent as a pianist. Following her death in 1982 he established the Dorothy Ames Snyder Piano Scholarship fund at . While all music students were eligible, piano students were given preference. Later he set up the Dorothy Ames Snyder Piano Scholar of the Year Award which goes each year to that piano student who, in the opinion of the music faculty, has made the most progress during the year.

Mr. Snyder took great pride in the scholarship fund which honored the memory of his beloved wife. He gave generously to the Fund each year, and at his death in 1991, the scholarship total was about $275,000. “The scholarship program is something I am proud of,” he said. “I feel good knowing Dorothy’s name will be remembered by other fine pianists over the years.” In recent years Mr. Snyder had used his Christmas card to relate to friends the names and brief biographies of Dorothy Ames Scholars and also alumni of the award. At Mr. Snyder’s request, Mrs. Snyder’s Steinway Grand Piano will be placed in a teaching studio, together with her portrait and the plaque on which the Dorothy Ames Snyder Piano Scholar of the Year are and will be listed. The piano is now being reconditioned by an outstanding piano reconditioning company.

When Mr. Snyder died in February 1991, he bequeathed his estate to for addition to the scholarship fund he had established. He requested that the name of the fund be changed to the “Dorothy and Lowell Snyder Music Scholarships.” The bequest will make this the largest named scholarship in the University.

In recognition of Mr. Snyder’s generous bequest, the trustees of the University have taken action to name the recital hall in Presser the Dorothy Ames and Lowell Snyder Recital Hall. 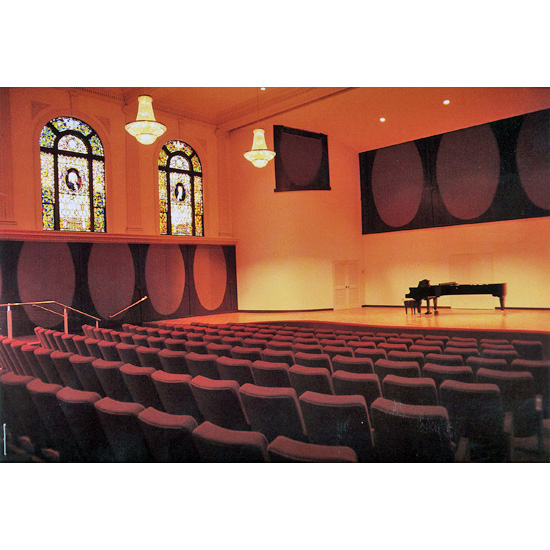