The Bent is a memorial placed by the S.E. corner of the Biggs Engineering Building.  The Bent was erected in 1975 through the generosity of Stanley Markey, BSCE ’46. The memorial’s name derives from the engineering terminology referring to part of a bridge substructure which supports a vertical load.

It recognizes  the Ohio Iota chapter of the Tau Beta Pi Association, an honorary organization representing all branches of engineering. The local chapter was established on March 31, 1973.

The purpose of the organization is:

To mark in a fitting manner those who have conferred honor upon their alma mater by distinguished scholarship and exemplary character as undergraduates in engineering, or by their attainments as alumni in the field of engineering, and to foster a spirit of liberal culture in engineering colleges.

The ‘Flame of Unity’ sculpture between Heterick Memorial Library and the Wesley Center was dedicated on October 31, 1970. As President Samuel L. Meyer noted in his  commemorative speech:

Today we are met to dedicate an inspirational place, the corten-steel “Flame of Unity,” eight feet high, presented to by Dr. and Mrs. Calvin G. Jackson, of Kenton.

The Corten-steel flame, rising from the walk, and the stainless steel cross, rising from the tower of the new , together represent the new insignia of the . That Insigne, combining the Christian symbol of the cross with the flame, related the church to God the Father by way of the second and third persons of the Holy Trinity – God the Son, symbolized by the cross and God the Holy Spirit, symbolized by the flame. The insigne was adopted on , by the Division of Interpretation, a part of the Program Council of the .

The new insignia is described in these words in the Methodist Spotlight, volume 12, no, 10, November 1968:

While not so commonly seen as some other Christian symbols, the flame has rich connotations. As one of several representations of the Holy Spirit, it is associated especially with Pentecost, when witnesses saw ‘…tongues as of fire, distributed and resting on each of them’ (Acts 2:3).

It is most appropriate that symbols representing the insigne of the should be placed on the campus of .

The location of the flame has some symbolic meaning also. It is mounted in concrete approximately half-way between the Heterick Memorial Library and the . Engraved in the base of the flame are the words of John Wesley, who in both England and America laid the foundation for The Methodist Church, words which should have so much meaning for all who traverse the campus of this Methodist-owned university: “Let us unite the two so long divided – knowledge and vital piety.” These words, spoken by John Wesley as a prayer at the opening of the in 1739, set forth the twin objectives of Methodist Institutions of higher learning: the intellectual and the spiritual. Placed where they are, the words of Wesley direct attention to the library, the House of Knowledge, and to the sanctuary, the house of God.

Pete the Great is a student work located on the south side of the Wilson Art Building. The brazed steel/ mild steel work depicts a giraffe and was created by Stephanie Staley in 1999-2000.

The Remington Walk consists of twelve reproductions of works by the American artist, Frederick S. Remington (1861 – 1909). They are located along the Green Monster between Stadium View Apartments and the Dial-Roberson Stadium, and are a gift from the James F. Dicke family.

The symbol of Pharmacy was presented in memory of Robert B. Hakes, ’55 PH, by his parents,

Dr. and Mrs. Vern Hakes, ’33 PH/ ’76 hon., dedicated on Honors Day 2002. It currently stands at the south corner of the Robertson-Evans Building.

Opus is the creation of California artist Bret Price and a gift to Ohio Northern from  James F. Dicke II. The work was installed on a knoll on Fraternity circle in 2000. It was formed from an 11,000 pound bridge beam and measures 38 feet 9 inches in length and stands 11 feet and 7 inches high.

The Dicke Family has a long-standing connection with the University during which they have been chartable benefactors to the institution. James F. Dicke, Sr. attended Northern’s College of Engineering and took over the family business after WWII. This firm became Crown Equipment, a major manufacturer of electric lift equipment. His uncle graduated from Northern in 1911 and became a successful inventor and patent attorney. 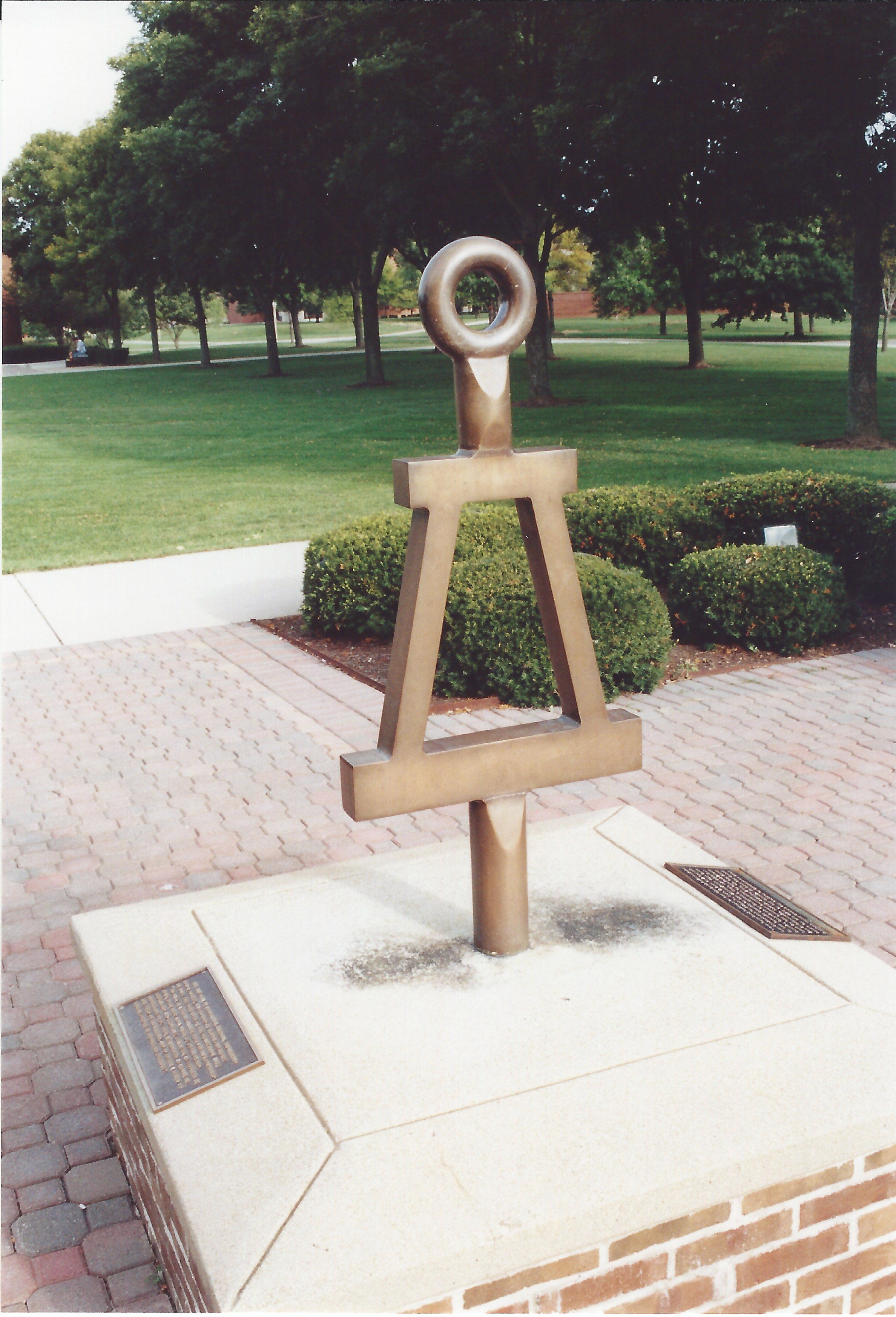 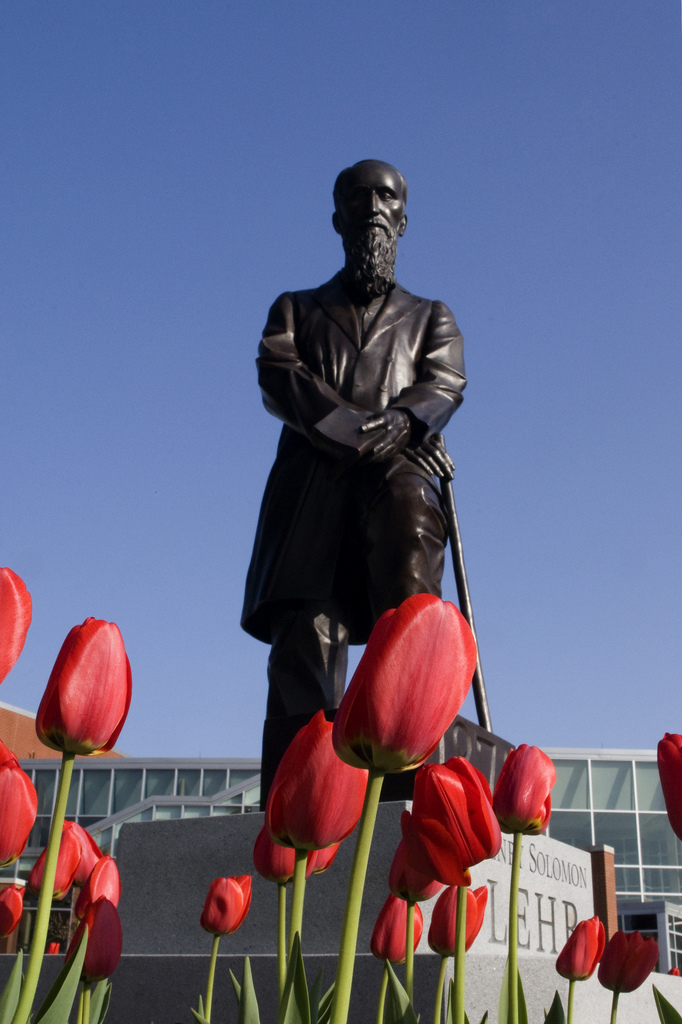 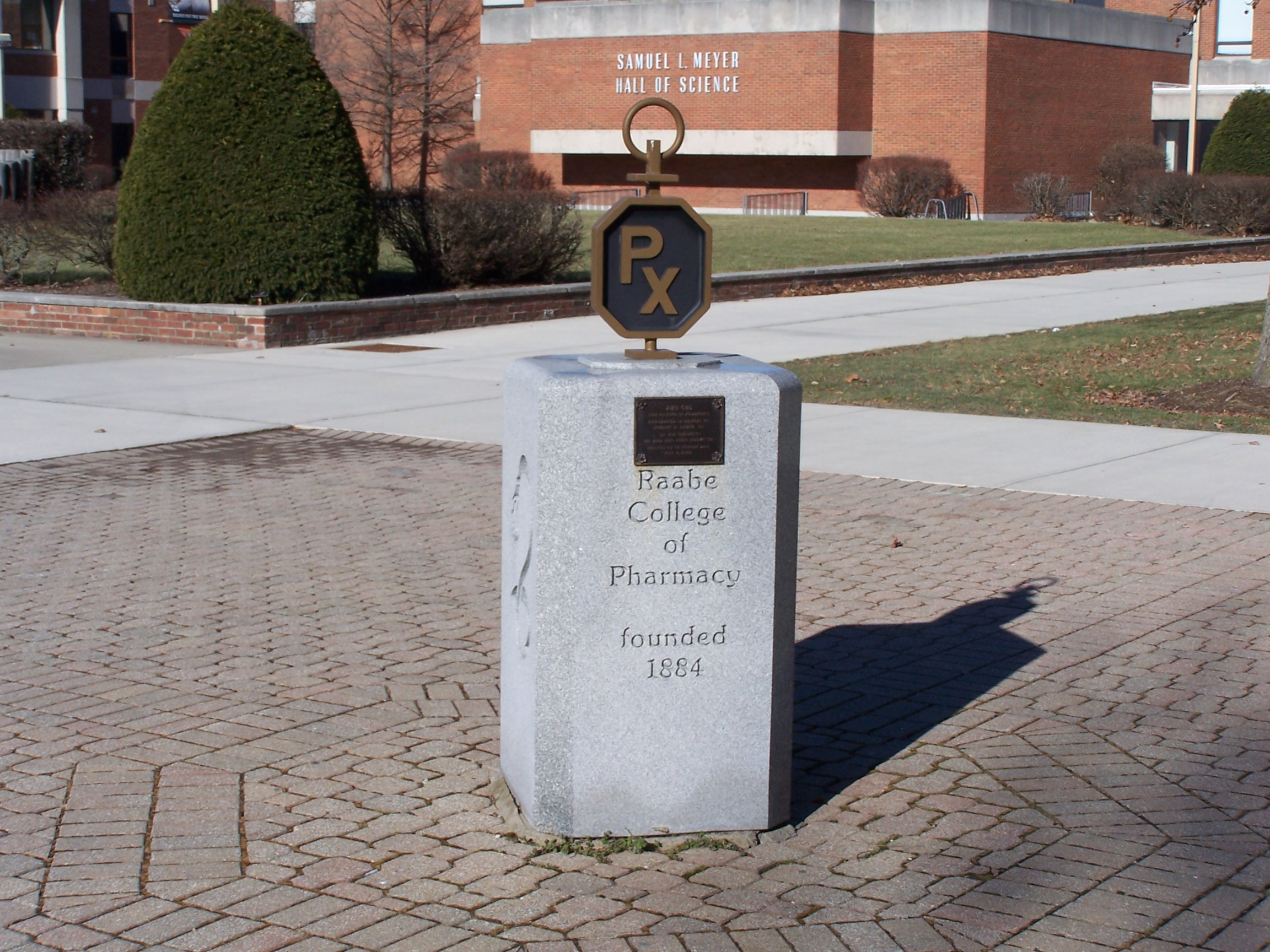