President Lehr built his first house around 1875, and it continues to stand at 310 S, Main St.

By the late 1880’s, Northern had become prosperous enough to allow Dr. Lehr to construct a residence that was more in keeping with his status as head of an up‐and‐coming school. In 1888, he engaged an architect, E.L. Lambert, of Kenton, Ohio to design a large two‐story frame residence, the cost of which was estimated at $8,200.

For that princely sum, President Lehr got a home with all the modern conveniences including "incandescent electrical globes" and speaking tubes. It was located on the site of the present‐day Stambaugh Hall. Over the years, this structure served as both the Lehr family home and the site of numerous university functions.

Upon his retirement from the university in 1903, Dr. Lehr sold the house to P.W. Turner. The university purchased Dr. Lehr's former residence in January 1930 from Mr. Turner and converted it into a hall for some 15 women. In honor of its most recent owner, it was christened Turner Hall. It was destroyed by fire in the early morning hours of February 3, 1949.

Today’s Lehr/Kennedy House was built after Dr. Lehr’s retirement. After a brief stay in Winona Lake, Indiana, he returned to Ada in Fall 1905 and occupied this residence until his death in 1923. Its name recognizes President Lehr and descendents of his daughter, Sarah, who became Mrs. Edward B. Kennedy. During the years it was the family's residence, several generations of Lehrs and Kennedys lived in the house.

The house was purchased by the university in 1971 and is now used as offices for Career Services and Student Leadership Development.

President McClure purchased a property on St, Rt. 81 known as Merrie Monte Farm. This was his home from 1943 to 1949

President McIntosh lived at Merrie Monte Farm from 1950 to 1965. Upon his retirement, the university ONU sold the house to Prof. David Stuart in April 1965.

The residence at 115 W. Lima Ave. was built by Dana Eugene Welsh. The properties on which the house was built were purchased by Mr. Welsh in Feb. 1931. Construction was completed later that year or early in 1932. Mr. Welch and his wife, Mary, lived there until June 1965 when they sold their residence to Ohio Northern. According to files in the V.P. for Financial Affairs Office, the agreed upon price was $40,000. Presidents Meyer, Loeschner, Freed and Baker lived there. The house is currently, 2008, being used by the Alumni Office.

Mr. Welsh was born on August 15, 1882 in Hardin County to Agnew and Cora Hofstetler Welsh. His father was editor and publisher of the Ada Record.
Married Mary Gladys Blair June 19, 1930, and both were active in a wide range of civic and university activities. Both attended Ohio Northern University; however it appears that they did not receive degrees.

Mr. Welsh was a pharmacist in Ada for 47 years, selling his business to Burke Gardner and S.D. Peper in 1952. Upon retirement, became president of the First National Bank of Ada. He served as a member of the Ada Public Library Board for 30 years and as treasurer of the Church of Christ for 46 years.
He died October 1968 in Indian River Memorial Hospital, FL and is buried in Ada’s Woodlawn Cemetery.

President Baker initially began his administration also living at 115 West Lima Ave. While the property had served the preceding two presidents well, it lacked adequate parking space and was inconvenient for the larger groups that presidents now needed to entertain.

In 1999 work began on an impressive and more functional residence on the southwest corner of the campus. The 5,000 square foot residence was occupied in September 2000, and an open house was held over Homecoming Weekend. In 2003 the building was named in honor of James and Eileen Dicke. 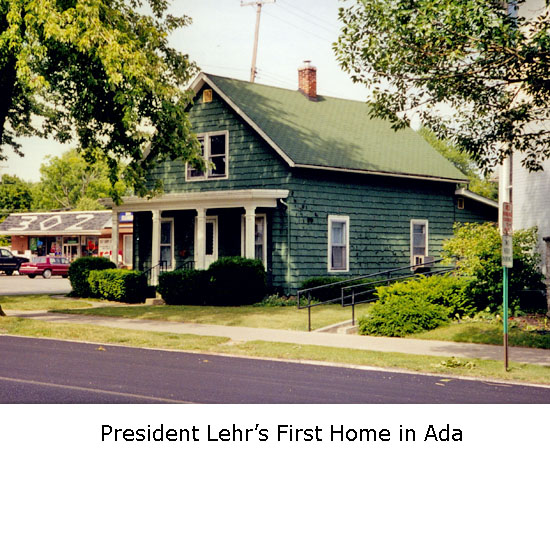 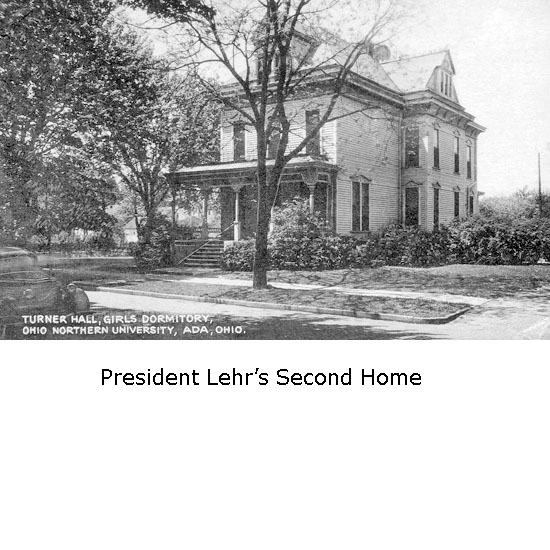 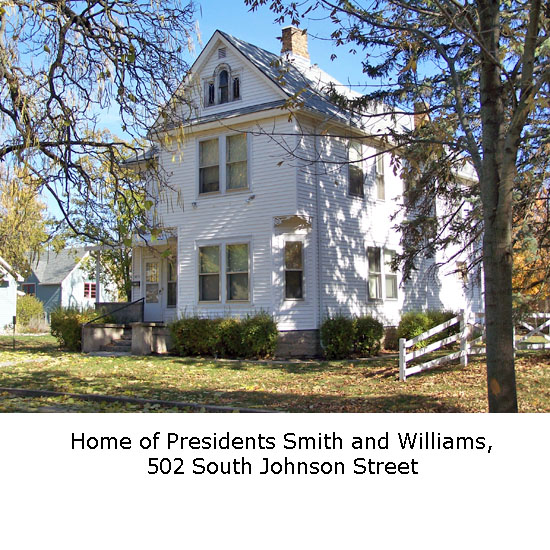 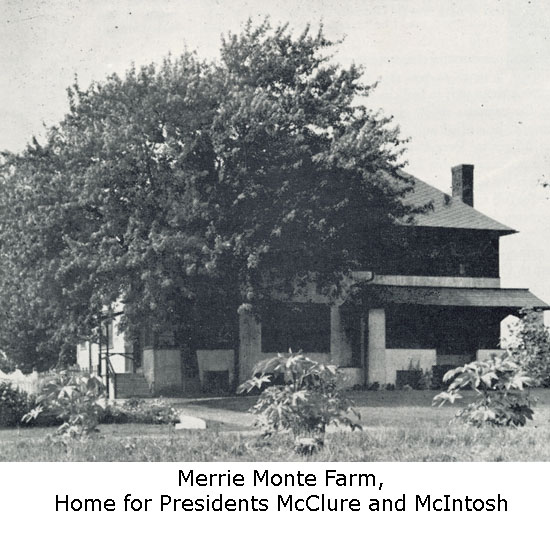 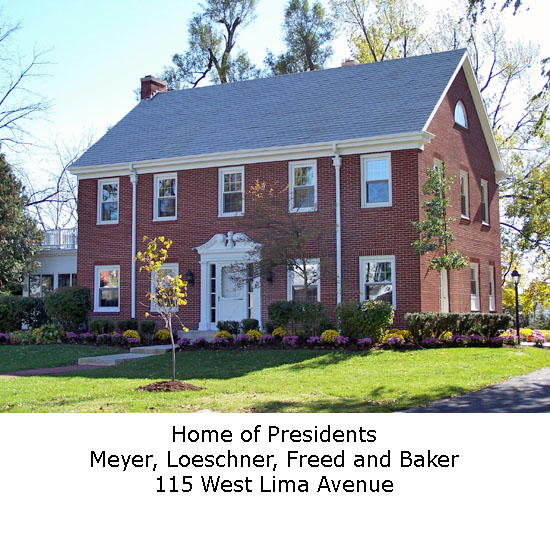 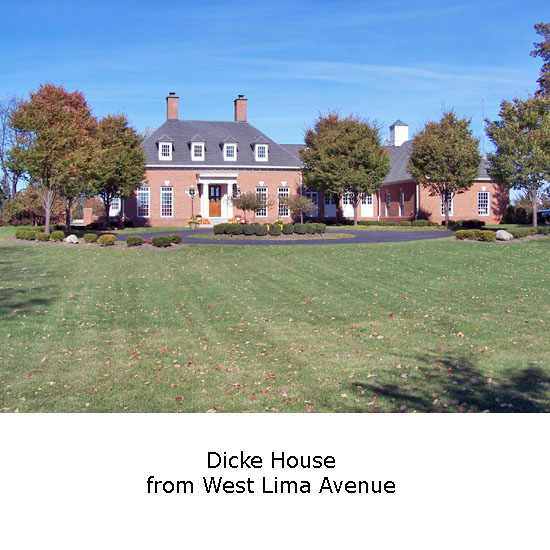 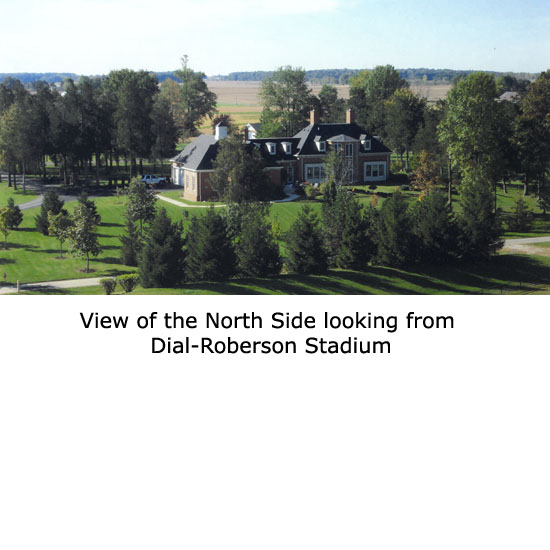